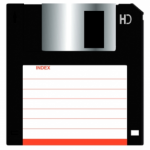 Look closely - This may be the last floppy disk you see

It has been a long time coming in my honest opinion, but Sony recently announced it would stop production of the floppy disk in March of 2011. (And there was much rejoicing)

The floppy was a long lived technology that almost everyone is is familiar with. In it’s most popular format, it was 3.5″ and held 1.44 Megabytes of data.  It has been available in many other formats of course, with the 5.25″ being a close second to the 3.5″. It was 1981 when Sony rolled out the first 3.5″ floppy and not much has changed since then.

While it should come as no surprise that the manufacture of the media would cease as newer storage mediums became more popular, it is probably going to be a little upsetting to a few who have entire libraries still on floppy. The easy solution to that dilemma is to copy the floppies to hard drives or USB drives which should preserve the data for the future. Using CDs and DVDs as a replacement has its own problems such as the data loss as the media ages.

Fortunately, there are ways to avoid the floppy by using a USB flash drive as a pseudo floppy. (If you require help with this, shoot me an email)

What will be the next outdated technology to go by the wayside? PS2 keyboard and mice? FAX machines? POTS phone systems? Dial up internet? Serial and Parallel ports on computers?  Analog (paper) phone books? I would say they are all on the endangered species list, but just keep hanging in there!