Yesterday I took a break from supporting and selling computers, servers, networks and all that technostuff and left my comfortable and safe office to experience something new, and very exciting – The BMW Performance Center Performance Driving School in Greer, SC!

Arrangements were made the day before by Kamran Popkin / @SwagClub & his lovely wife Natalie who is the Facility Coordinator at the Performance Center. My partners in crime for this mission were Kevin Lyons / @KevinLyons from Lyons Den Solutions and Emelie Hegarty / @MissEmelie marketing expert for Habitat for Humanity of Greenville County.

I spent the prior evening contemplating what it would be like… Wondering if we would be driving wimpy cars, with some speed limiter or other means of governing the speed. I even took some time to look at videos others had posted on the web in order to get a feel for what was to come. Tuesday wasn’t coming fast enough.

After arriving at the BMW PC, we were treated to an excellent buffet before being briefed and then sent out in beautiful, and brand new BMW sports cars. We were broken up into 3 groups of 7 each, and for us, that meant that Kevin and I would be together in one car and trade off, and Emelie would take a car to herself. 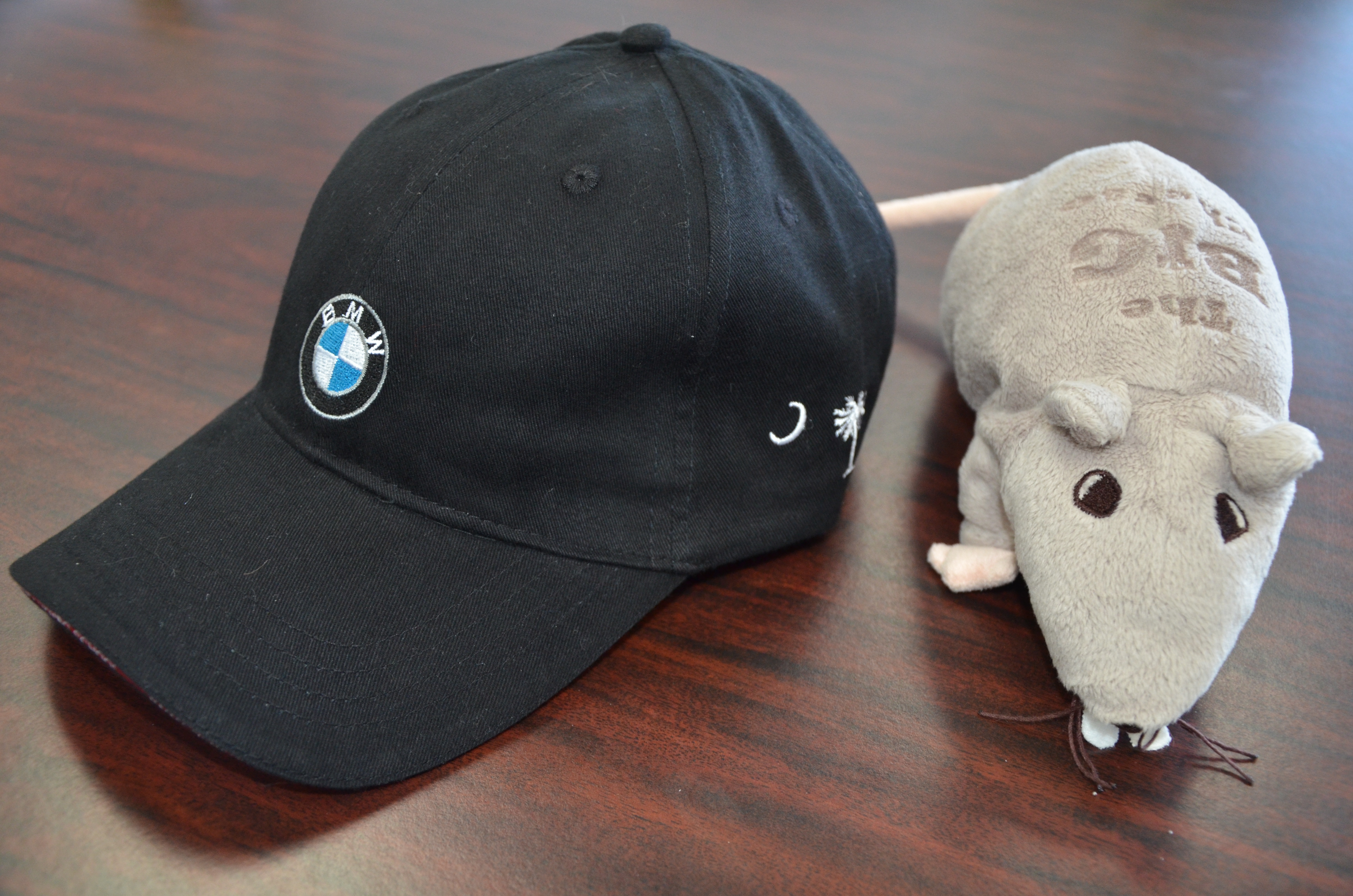 We took off towards the “Rat Race” track first, which was a mostly flat surface, partially wet from the rains the previous evening and from sprinklers that run continuously. The car was the ever popular 3 series sedan with all the options. One thing different about from how you normally drive it on the street was that the traction control had been disabled for this course. An oval had been laid out, delineated by pylons, and two cars at a time raced against one another. Each car was staged one half lap from the other, then went multiple laps, with the only rule being you could not pass the other car (if you could catch them or if they spun out).  That’s right, that was the only rule. No limits baby!

Each car raced against the other cars, changing drivers if necessary. Kevin drove first and I warned him about our female counter-part, saying, “Watch out for her, I think she’s going to be trouble”…  Emelie was exactly that. She drove it like she stole it! I still think she has done this before, though she insists she has not. Kevin believes someone pissed her off that day, because she wasn’t giving anyone an inch. I think she beat everyone there, including a Grreenville County Sheriff’s deputy who is in charge of patrol and two BMW Performance Driving School employees. Somehow, I managed to squeak out a win against her and took the title of “King Rat”. The stuffed rat in the picture above says “The Big Cheese” and serves as the trophy! 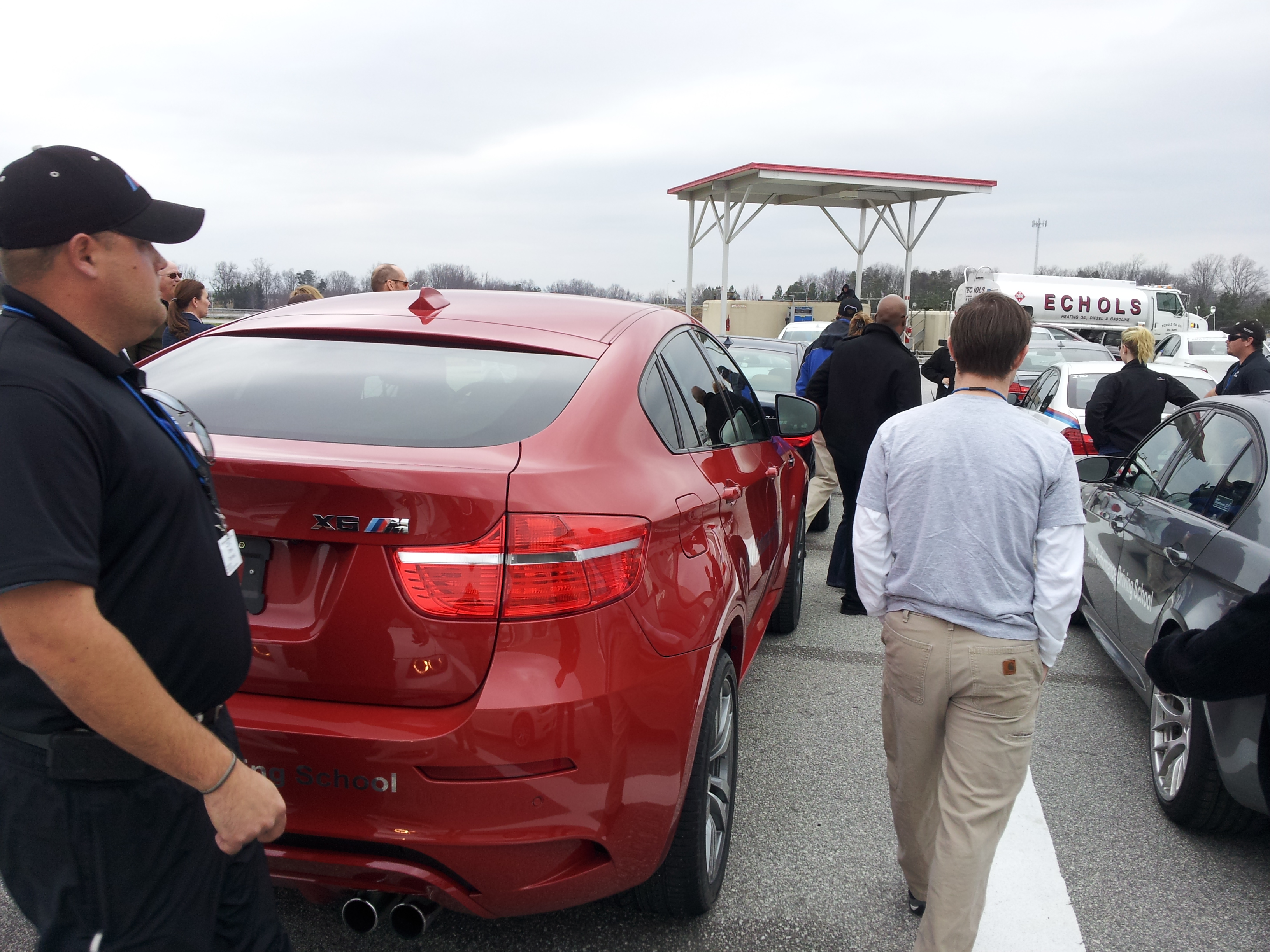 We returned the 3 Series cars to the staging area and next moved to a fleet of cars comprising of a X6 in M Sport trim, a 750i, Z4 and a 335i. We kept our same group and teams of drivers and proceeded to a road course. If you pull up the aerial view of the BMW Performance Center in Greer, it is the largest of the tracks you will see in the satellite photo. They had shortened it up a bit, so we couldn’t really stretch our legs fully, but in the length of that course, they let each person drive each of the cars to its limits. Seriously, no limitations except your own desire for self-preservation and again the rule that you could not pass another vehicle or get too close to the car in front of you.  (Safety really was the major topic of the day in spite of all my talk about “no limits”).

I should add here that before we were set free on these courses, a professional driver escorted around each track, giving us the proper lines to take to achieve the maximum performance from the cars, and how to take these tight turns in a safe manner.

The most surprising car of the lot was the 750i, which is a huge 4 door sedan that likely could dust off a Camaro, Mustang or Challenger with ease. The power and traction control was simply amazing for a vehicle of this stature. At no time did it get squirrelly as we put it through the paces.

The Z4 was exactly as we expected, zippy and easy to throw around where you wanted it to go. The particular car we had was brand new with only 357 miles on the clock. 357 miles of driving with two alternating modes, full throttle and full brake I imagine!

The X6 M Sport was agile for a big beast and I believe it had 550 HP that kept it propelled in a forward manner with ease. The big brakes helped bring it to a controllable speed to make the sharp turns.

The 3 Series performed superbly. I believe for the money, that you couldn’t go wrong with that car. Quite speedy and predictable. Who could ask for more?

This was not a timed event, or a race of any sort, it was the opportunity to open up a vehicle and feel what it could, and could not do. However, this exercise did serve to prepare you for what was next…

We moved to the serious road course, a short track laid out for you to accelerate as fast as you could, then into a slalom, then as sweeper, a hairpin, a little twisty S-curve coming off a banked curve into a stop box.  This event was timed, and it took the most concentration and control of any of the courses.

As with the others, we were taken around the track, escorted by a professional and shown the lines to take. I saw this course as having the biggest penalty for failure. Guardrails, drop-offs into the dirt, etc, and that, combined with the fact that the metal didn’t belong to me,  kind of held me back. My cohort, Kevin, didn’t seem so bothered and did very well with his times, as did Emelie, though she decided once to take the car for a spin, quite literally.

The M3 dual clutch transmission take a little getting used to, at least for me, as I am used to actually pressing a clutch (most of the time) in manual transmission cars. But, the way you are SUPPOSED to do this is to put the car into 1st, using the paddles on the steering wheel, then at redline (7 grand or so) hit the right paddle and grab second. I think just about every time I made my run I actually thought about pressing my left foot to the floor before hitting the “+” paddle. Then you are not supposed to hit the brakes, but instead snap the car between the pylons, and get yourself in line for the sweeper, braking at the last possible minute, and powering hard to the right (drifting here would be okay), going up the hill as far to the outside right of the curve as you can, then heading between the rows of cones that are opened up in your vision at that point, and at the last possible second, slam your foot to the floor so that the massive brakes bring you to a halt before you move outside of a “box” established between four cones. Your time then appears for that run, and you forever have bragging rights.

I wasn’t the slowest, but I sure wasn’t the fastest. The fastest was an employee of BMW Performance Center who says he had never made that run before. His trophy was a cute custom squishy pylon with the date and his time written on it. He signed it and gave it to Emelie.

I think Kevin has missed his calling, with a little training, I believe he would be a superb auto-cross or even SOLO II driver. Did I mention I have done SCCA racing before? Quite a bit when I was younger… But I had to pay for my own tires, gas and maintenance. Yesterday, all that rubber we tore off the tires and left on the pavement and under the fender wells of expensive BMWs was part of the package!

The last thing we did was a “hot lap”, where we piled in a car with a professional and went all-out.  Wow… They are incredible drivers! At one point, we drifted around a circular track, and our driver was in such total control of the vehicle that he could have probably used one hand to fix his hair while looking in the rear view mirror!

Today I am back at my desk, but still talking about yesterday. I am sure my employees and family will grow weary of it, but I will likely be talking about it for a good long while, and maybe some day, I will get to return!

But first, I want our 16 year old boy to do the youth program, where professionals teach kids how to drive and how not to.

Thanks to the BMW Performance Center and to the Popkins for the opportunity to do this, it is amazing that we have a great resource like this in our backyard!