We knew the time was coming, but we didn’t know when, exactly…….

According to an article on cnet.net, entitled “Windows 7 overtakes XP as Mac OS X passes Vista“, Microsoft Windows 7 has finally surpassed Microsoft XP as the most dominant operating system!  Predictions were all over the place, from 2013 to as far out as 2016, with a few people thinking it should have happened already.

As businesses and individuals have made the transition from XP to Windows 7, computer service and repair professionals have seen a sharp decrease in the number of machines that have been infected with viruses, worms and trojans. Well, a sharp decrease in Microsoft based computers. We’ve seen an increase in Apple Mac malware infections that is right in line with their increasing numbers.

In 2011, upwards of 30 percent of our computer service and support revenue was comprised of malware related repairs. So far, in 2012, with over half of the year behind us, we’ve seen a decline of over fifty percent in virus cleanup! It’s rare for Windows 7 machines to come through our door infected like we used to see with XP! (Though we still do see them).

You’ve probably heard already, but Microsoft is unleashing a new operating system on us, Windows 8, and though it is not even officially released, just the pre-release has a 0.23 market share!  How long will it be before it has the same kind of impact that Windows 7 has? WILL it have that kind of impact?

Here’s the numbers for those of you who don’t want to click the cnet link above: 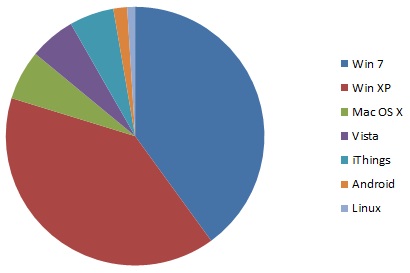 The percentage of Apple Market Share could be considered evil.

These stats are from NetMarketShare.com and can be found here.

For those who want to see all versions of Windows compared to Mac OS X: