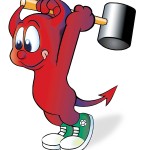 I know it is tempting, but smashing your broken computer with a hammer will likely result in making your bad day even worse. After all, you would have to clean up that mess, and there is always the chance that the flying pieces could put out an eye or something!

I spoke with a man today about his computer network, and he told me whenever he has problems, he just replaces the computers. When asked how often he has problems he told me once or twice a year!!!!! WOW! I can’t even begin to imagine the time spent reloading software, restoring data, and the cost of replacing a computer… So I inquired as to why this was his philosophy and he told me because every computer repair house he used in the past had ripped him off. I asked for specifics and he gladly gave them…

One computer had no video on the screen, the IT provider said it was the computer. He had them replace the computer, and after they had installed the new one, it turns out the monitor was bad all along. Another computer was locking up randomly, and he had the network support company look at it, something like a dozen times (he MAY have been exagerating, but I’m not sure), and they never fixed it. He said he paid over 1000 in labor and the computer was still locking up.

Believe it or not, that was just the start. He mentioned a network card that went out due to a lightning strike, and a different computer repair place replaced the card, and charged him over 500 dollars for the card and the labor. The worst has to be an upgrade from Windows XP to Windows Vista, that the local computer service company performed for him… The OS, RAM upgrade, hard drive upgrade and labor was almost 2000 dollars!

I would say that this guy had the worst run of luck that anyone I know has ever had regarding computers, thus he adopted the “If it breaks, replace it” attitude. He claims it costs him less that way and he doesn’t have to deal with computer technicians who make the original problem worse, inconvenience him and then charge him astronomical rates.

Here is where I wonder how these IT providers could possibly stay in business? Who would call them a second time?

My promise to you is that should you use Homeland Secure IT for your computer service / repair, you will *never* encounter the types of issues that my new friend encountered. We never charge for return calls on a problem we should have fixed correctly the first time. We would never charge for something that was OUR mistake, like a misdiagnosed monitor. And our prices are so much lower than what these other computer shops charged that I wonder if we should not be considering raising ours to match!

Should you have computer problems, please call us, we offer a free evaluation, give you honest, quality service at reasonable rates, and insist upon your total satisfaction. Keep our number handy. 864-990-4748

We want to be your computer repair professionals whether you need a virus removed, anti-virus software installed, have network or wireless / wi-fi problems, just require Microsoft patches, or replacement of an entire PC!