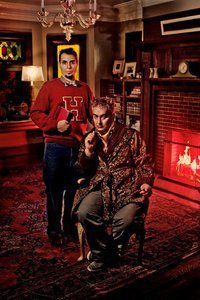 Paul Savas and the Warehouse Theatre have done it again… They provided an evening of entertainment for my family that did not break the bank! Just what I needed on a Friday evening!

This time we attended the opening performance of “Screwtape”, an adaptation of “The Screwtape Letters” by C.S. Lewis, which I have never read or had any exposure to at all, nor had my daughter Megan. Of course, my wife Pamela read up on it as if there would be a test at the end.

I must admit, after seeing the incredible production of “The Rocky Horror Show” at The Warehouse Theatre, I was half expecting “Screwtape” to be about a 70s adult film or something similarly risque, but in my heart I knew the author wouldn’t go there as he was a Christian. In short, I really didn’t know what to expect at all…

The play was indeed Christian themed, and one we can all relate to, even if you are not a believer. It is about good and evil, and how evil walks the earth and tempts you…

In this case “Wormwood” (played by Dayrl Ward Phillipy) is a fiend from Hell, charged with the task of tempting Mike (Jason Adkins) under the supervision of his uncle “Screwtape” (Kevin Treu) , a seasoned devil. Should Wormwood fail, he will be eaten below, as their slogan goes, “Bring us food, or be eaten…”. They enlist a female fiend to help with this job, “Slumtrimpet” (Roberta Barnes) and a running gag is the continued varied pronunciation of “Slumtrimpet”, whom they resort to calling “Slut”.

Interesting to me is that this comes from the point of view of the evil side, showing everything that Screwtape, Wormwood and Slumtrimpet embark upon to get Mike to give up his soul. They reverse all the lines we are used to hearing, so we don’t hear, “Father above”, instead we hear, “father below”, etc.

I won’t give away the plot or the ending here…   You could read up on that at the Wiki entry for The Screwtape Letters.

As in every event we have attended at the Warehouse Theatre, the set and props were perfect, the audio, video and lighting awesome, and the actors were incredible. The Upstate is apparently filled with so much talent that I didn’t even know existed and The Warehouse has found them! The only thing that could really be improved upon would be the audio track used in a couple of scenes in which the lyrics are hard to pull out. I write this one off as an opening night glitch and surely this will be cleared up quickly.

Simple people are easily amused, but I really enjoyed the stereo effects, the use of video projectors and scrims.

This show is appropriate for your more liberal church groups, as long as they can handle the words, “slut”, “bitch”, and a topic from the perspective of hell, instead of heaven for the most part. I believe it would be rated “PG” if it were a movie.

Thank you again to the cast, crew & supporters of The Warehouse Theatre for another great production! I can’t wait for January to get here because, “Who’s Afraid of Virginia Woolf” looks interesting too!

You need to reserve your tickets now as I understand they are selling out fast, last night was totally sold out, tonight is probably sold out.