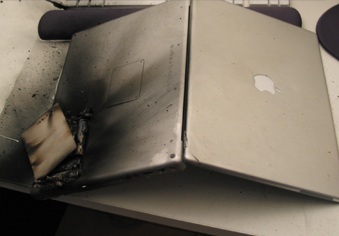 Could your Apple Mac Macbook, Macbook Pro or Macbook Air be a ticking timebomb? According to one researcher, yes.

An interesting article over on PHYSORG.com states that a researcher with Accuvant Labs will be demonstrating an exploit on current Mac models that could result in a battery pack actually exploding if the vulnerability is leveraged by hackers.

It seems that the issue at the heart of this matter is a firmware password that, if known, could be used by someone with malicious intent to change parameters inside the Mac fairly easily.

This will be an interesting one to watch develop over time due to the nature of firmware updates. A large majority of electronics from your A/V system remote control to the computer in your car can receive updates in various ways. Smartphones can get updates OTA (Over The Air), automatically, and so do many internet attached appliances like VoIP, IP Surveillance and Security systems.

At the time I write this, I am unaware of an actual exploit in the wild for the Apple Mac products, however, after the upcoming demonstration to a group of  “black hat” hackers, if un-addressed by Apple, we could see something out there in the next few weeks.