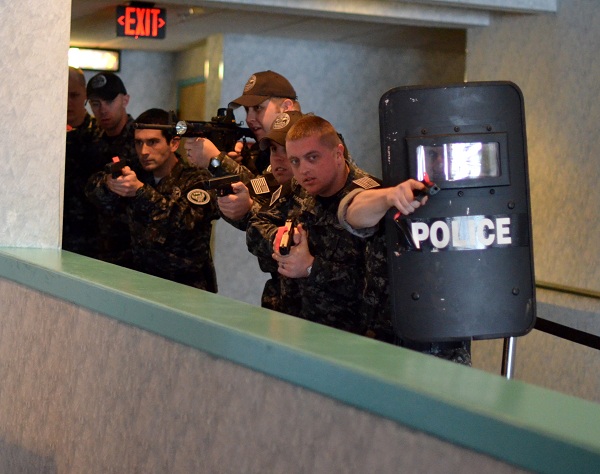 Today, on my daily drive in to work, I passed an unusual scene that caught my eye…  A number of Easley PD vehicles were in the parking lot of the Easley Cinema 8 movie theater.

As I made my way back to the location, I spotted officers clad in camouflage entering a back door with weapons drawn. My first thought was that something had gone terribly wrong at the theater, images of the horrific 2012 Aurora Colorado shooting filled my head. Then, I came to my senses. It was 10:00 AM on a weekday, and the police vehicles were neatly backed in.  This had to be a drill.

The first officer I made contact with confirmed that was what was going on.  I then asked him if I could snap a few pictures, not wanting to simply go plastering the web and TV with images that could reveal details that would give a potential perpetrator any kind of tactical advantage. This officer was understandably not keen on it, but gave me the name of the person in charge, who I reached out to in hopes of giving me permission to share this newsworthy event.

Major Tim Tollison of the Easley Police Department was more than generous in giving me a rundown of the exercise unfolding. In short, Major Tollison explained that their newly formed tactical unit was undergoing training on “hostage and active shooter scenarios”. The vice-president of REI Cinemas, Don Massingill, was also present and stated that,  “REI Cinemas is definitely committed to public safety and anything we can do to make their patrons safer and let the police be better trained, and we are happy to participate.”

I attempted to contact my friend and news diva, Amy Wood, with WSPA, but time was limited. The exercise had started at 8:00 AM and was soon to wrap up, leaving little time for a news crew to be dispatched. In lieu of the professionals being there, I was permitted to take a few pictures which I have posted on my Facebook account as well as a short video, which did not turn out nearly as well as I had hoped.

My personal reaction is that Easley’s new tactical response team is off to a great start! In watching them, I was left with the impression that these men know what they are doing, and if ever they have to use these skills, they are going to do a superb job of carrying out the task at hand. I know that

I give full permission to anyone wanting to use the information contained within this blog post or pictures, audio or video related to it, with two stipulations:  You credit John M. Hoyt and notify me of it’s usage using a pingback, tag, email, phone call or some other form of letting me know.